The history of the bodywork

The passion for Ferrari and tradition in transformations. 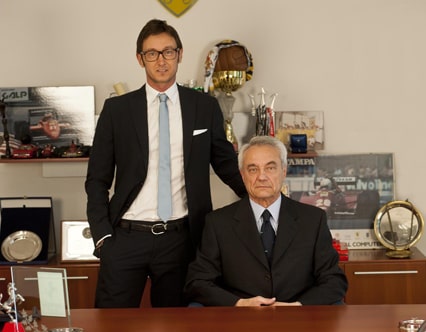 Thanks to his long experience in the field, Jeris Ferrari today can be considered one of the greatest experts in Modena, both in the restoration and in the (hardly ever) simple repairs.

His career began 1958 with Piaggio where he worked with mopeds and Vespas and then in 1964 he started his journey on cars.

He started his first enterprise in 1972, in via Toscanini 28 in Modena with just one employee and dealing mostly in car repairs. A few years after he started working on vintage car repairs. Over the years, other transfers have marked the history of Jeris Ferrari: in May of 1981 he moved to Via Lussemburgo 11 and then in November 2002 he moved to his current headquarters in Via Finlandia 100 in Modena.

The inauguration, in December 2002 was a success, confirmed by the presence of his friend and former Formula 1 driver, René Arnoux and the Italian national TV that captured the moment with the "champion" and the entrepreneur.

Over time the number of employees grew, the working methods changed and an increasing number of systems and equipment was introduced.

Today Ferrari Jeris is a well-known company, a mainstay in the Modena area.

It is actually impossible not to notice the many awards it received for distinguished quality of service, a fact the owner is certainly and rightly proud though his humbleness prevents him from bragging about it.

Jeris Ferrari, the true "car body genius" and above all, a great lover of cars of all kinds, is still today one of the best restorers in Modena who, not surprisingly, boasts the title of "capital of engines".

To understand this, just take a look at his workshop: cars of all brands and ages, but above all the strangest, rarest or most "difficult to handle" car one could think of.